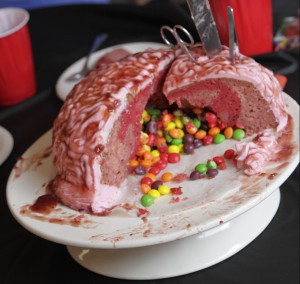 I combine theory and methodology from economics, psychology, and neuroscience to understand how people decide, why they make wrong decisions, and how to make them better choosers. My research focused on how economic preferences change over the lifespan and contexts, including how thirst, being observed, outdoor luminance, as well as the structure of current and past choice affect behavior.

I have been awarded over $33 million in grants as a Chief Investigator, including ARC Centre of Excellence, DECRA, Discovery, and Linkage grants. In 2017 I received the Award from the Society for Neuroeconomics for my contributions to our understanding of decision-making.

Berger A. and Tymula A. (2022) Controlling ambiguity: The illusion of control in decision-making under risk and ambiguity [short poster presentation] accepted at Journal of Risk and Uncertainty

Tymula (2019) Adolescents are more impatient and inconsistent, not more risk-taking when observed by peers – a comprehensive study of adolescent behavior under peer observation, Journal of Economic Behavior and Organisation, 166:735-750

Glimcher, P.W. and Tymula, A. (2017) Let the sunshine in? The effects of luminance on economic preferences, choice consistency and dominance violations. PLoS ONE, 12(8): e0181112

Tymula, A., Woelbert, E., Glimcher, P.W. (2016) Flexible Valuations for Consumer Goods as Measured by the Becker-DeGroot-Marschak Mechanism. Journal of Neuroscience, Psychology, and Economics,  9(2):65-77.

Tymula A. and Wang X. (2021) The years of living dangerously: can adolescents be encouraged away from risky behaviour? Sydney Business Insights

Tymula A. (2016) Financial gamble? My brain made me do it. The Conversation

Tymula, A. and Glimcher, P.W. (2015) Are adolescents really risk-takers? Most adults say yes, but the science is starting to say no. Frontiers for Young Minds.  3:3.

Tymula A. (2014) Explainer: neuroeconomics, where science and economics meet. The Conversation

Quasi-hyperbolic discounting is one of the most well-known and widely-used models to capture self-control problems in the economics literature. The underlying assumption of this model is that agents have a “present bias” toward current consumption such that all future rewards are downweighed relative to rewards in the present (in addition to standard exponential discounting for the length of delay). We report a meta-analytic dataset of estimates of the present bias parameter based on searches of all major research databases (62 papers with 81 estimates in total). We find that the literature shows that people are on average present biased for both monetary rewards (beta=0.82, 95% confidence interval of [0.74, 0.90]) and non-monetary rewards (beta=0.66, 95% confidence interval of [0.51, 0.85]) but that substantial heterogeneity exists across studies. The source of this heterogeneity comes from the subject pool, elicitation methodology, geographical location, payment method, mode of data collection (e.g. laboratory or field), and reward type. There is evidence of selective reporting and publication bias in the direction of overestimating the strength of present-bias (making estimates smaller), but present bias still exists after correcting for these issues (for money beta=0.87 with 95% confidence interval of [0.82, 0.92] after correcting for selective reporting).

We study economic decision-making of 284 people with obesity and pre-diabetes who participated in a 6-months randomised controlled trial to control weight and prevent diabetes. To elicit preferences, we use incentive-compatible experimental tasks that participants completed during their medical screening examination. We find that, on average, participants are risk averse, show no evidence of present bias, and have impatience levels comparable to healthy samples described in the international literature. Variations in present bias and impatience are not significantly associated with variations in markers of obesity. But we find a significant negative association between risk tolerance and BMI and other markers of obesity for women. A 1 standard deviation increase in risk tolerance is associated with a 0.2 standard deviation drop in BMI and waist circumference. Impatience moderates the link between risk tolerance and obesity. We replicate the key finding of interaction effects between risk and time preferences using survey data from a nationally representative sample of 6,281 Australians with similar characteristics. Deviating markedly from the literature, we conclude that risk tolerance brings benefits for health outcomes if combined with patience in this understudied but highly policy-relevant population.

Research in the multidisciplinary field of neuroeconomics has been driven by two influential theories regarding human economic choice: prospect theory, which describes decision-making under risk, and reinforcement learning theory, which describes learning for decision-making. We hypothesized that these two distinct theories guide decision-making in a comprehensive manner. Here, we propose and test a new decision-making theory under uncertainty that combines these highly influential theories. Collecting many gambling decisions from laboratory monkeys allowed for reliable testing of our hybrid model and revealed a systematic violation of prospect theory’s assumption that probability weighting is static. Using the same experimental paradigm in humans, substantial similarities between monkey and human behavior were described by our hybrid model, which incorporates decision-by-decision learning dynamics of prediction errors into static prospect theory. Our new model provides a single unified theoretical framework for exploring the neurobiological model of economic choice in human and nonhuman primates.

Glimcher P. W. and Tymula A. (2021) Expected Subjective Value Theory (ESVT): A representation of decision under risk and certainty

We present a descriptive model of choice derived from neuroscientific models of efficient value representation in the brain. Our model, a special case of Expected Utility Theory, can capture a number of behaviors predicted by Prospect Theory. It achieves this with only two parameters: a time-indexed “payoff expectation” (reference point) and a free parameter we call “predisposition”. Our theory sheds new light on the computational origins and evolution of risk attitudes and aversion to outcomes below reward expectation (reference point). It delivers novel explanations of the endowment effect and the observed heterogeneity in probability weighting functions

Kettlewell N. and Tymula A. (2021) The heritability of trust and trustworthiness depends on the measure of trust

Using a large sample of 1,120 twins, we estimated the heritability of trust using four distinct measures of trust – domain-specific political trust, general self-reported trust, and incentivized behavioral trust and trustworthiness. Our results highlight the importance of measuring trust in a context because its heritability differs substantially across the four measures, from 0% to 37%. Moreover, we provide the first evidence on the heritability of political trust which we estimate to be 37%. Furthermore, like the heritability, the environmental correlates of trust also vary across the different measures with political trust having the largest set of environmental covariates. The perceptions of COVID-19 health and income risks are among the unique correlates of political trust, with participants who are more worried about financial and health consequences of COVID-19, trusting politicians less, stressing the importance of trust in political leaders during a health crisis.

Shane F., Rosato A., Tymula A. (2021) A novel experimental test of truthful bidding in second-price auctions with real objects

We present experimental evidence on bidding in second-price auctions with real objects. Our novel design, combining a second-price auction with an individual-specific binary-choice task based on the outcome of the auction, allows us to directly identify over-and under-bidding. We analyze bidding in real-object and induced-value auctions, and find significant deviations from truthful bidding in both. Overall, under-bidding is somewhat more prevalent than over-bidding; yet, the latter has a bigger magnitude, especially with induced values. At the individual level, we  nd no relation between the tendency to deviate from truthful bidding in induced-value vs. real-object auctions.

We estimate whether risk preferences are affected by traumatic events by using a unique survey of Sri Lankan twins which contains information on individual’s exposure to the 2004 Indian Ocean Tsunami, participation as a combatant in the civil war, validated measures of mental health and risk preferences, and a rich set of control variables. Our estimation strategy utilises variation in experiences within twin pairs and allows us to explore wealth shocks and/or changes in mental health as mechanisms. We find that both events lead to less risk aversion, a result that is not driven by mental health or wealth changes.

Decision-making and ageing exhibit at the Museum of the National Academy of Sciences in Washington, DC (part of the Life Lab exhibit)